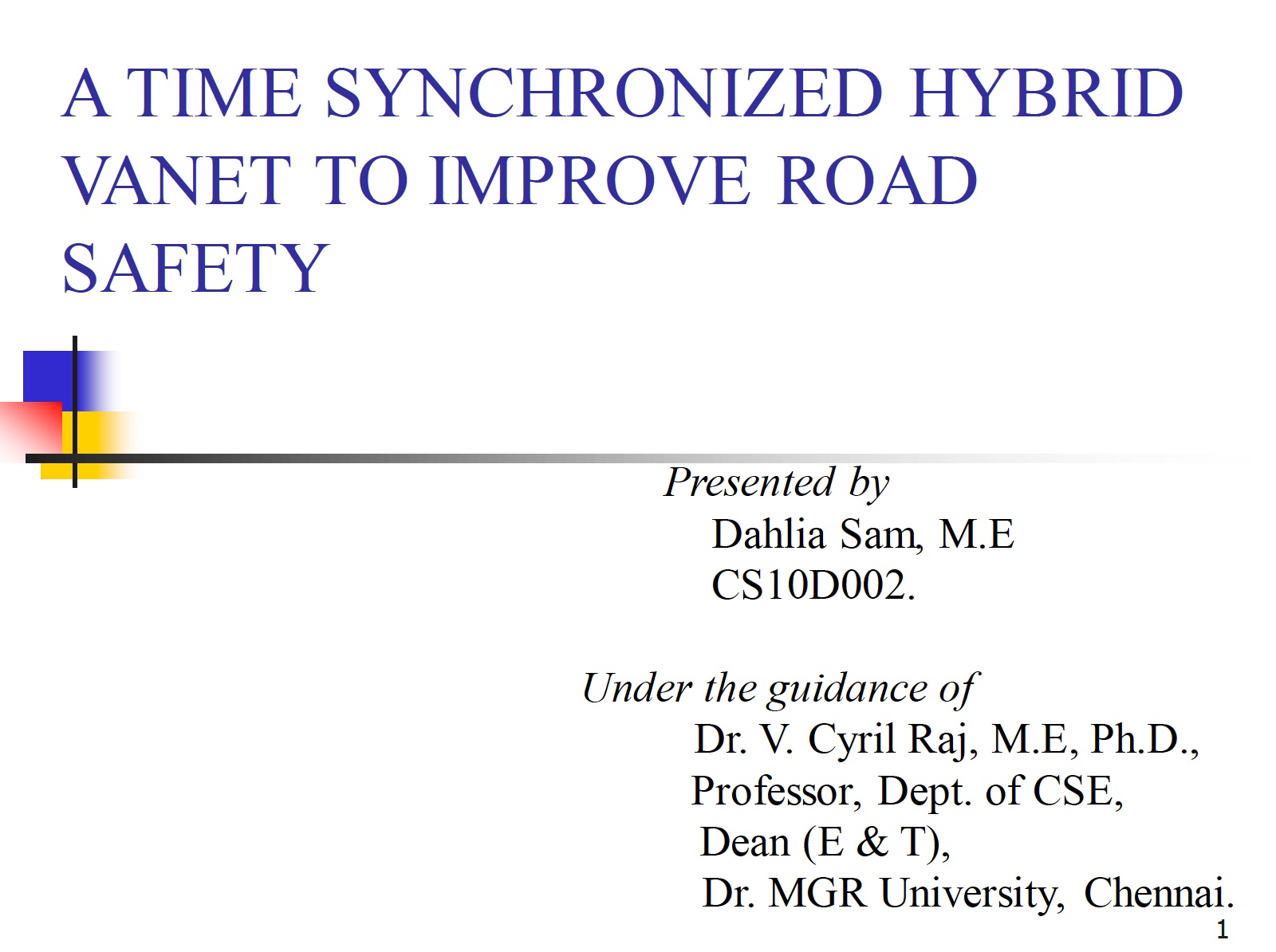 VANET is a type of mobile ad hoc network in which the moving vehicles act as nodes. It can be simply defined as ‘computer network on wheels’. There has been lot of research done over the last few years for using VANETs in many applications including accident prevention, real time safety alerts, improved navigation system, media and entertainment in vehicles etc.

In this work a hybrid VANET has been developed to improve road safety for both the drivers and the pedestrians on the road. The hybrid VANET is comprised of VANET together with roadside sensors and/or pedestrian body unit. These communicate wirelessly with each other to form an Intelligent Transport System (ITS). The conventional VANET has only vehicular nodes and will be subject to frequent network disconnections especially in low traffic areas. Due to this some events in the road may go undetected. It may also happen that the events detected may not be transmitted to all the vehicles due to lack of connectivity. In such situations, static roadside sensors could play an important role to keep the network connected while constantly detecting the happenings in the road. In the first method proposed here, these wireless roadside sensors were deployed at fixed distances such that they can communicate with each other. This will make the network constantly connected and more efficient. It also proves to be a cost effective and feasible option. This is because sensor technology is well developed and is cheaper to deploy. The Hybrid VANET with roadside sensors proved to be a promising solution as per the simulation results.

Another method used to detect human presence in the path of the vehicle was using a body unit. Though the roadside sensors are good enough to detect most of the road events, its detection range for humans is lesser than the detection range for vehicles. To ensure that the presence of the pedestrians will not go undetected at any time, an additional pedestrian body unit (PDU) is included in the Hybrid VANET. This gives an extra level of protection to vulnerable pedestrians like kids, handicapped or simply distracted individuals. The Hybrid VANET system will make sure that any pedestrians on the road or any incident happening on the road is detected on time and communicated to the vehicles. The alert message can be communicated to the drivers to give them sufficient time to take appropriate decision. It can also be connected to the vehicle control system, which automatically activates the brake control or the throttle control.

For the above-mentioned VANET application, the vehicular nodes have to constantly communicate with each other as well as with the roadside equipment or the pedestrian body unit. The messages communicated are very time critical as even a delay of seconds could lead to fatal accidents. In order for the messages communicated between the nodes of the hybrid VANET to be meaningful and beneficial, it is important that the clock time of all the nodes in the network is synchronized. This includes the clocks of the vehicular nodes, the roadside sensors and the pedestrian body units. To address this issue a Hybrid Clock Synchronization (HCS) algorithm was developed to synchronize the clock times in the highly dynamic H-VANET environment. The proposed HCS algorithm accommodates the frequent topology changes of the VANET. It also takes place within the few seconds that the vehicles and the other nodes stay in the communication range of each other.

The above-proposed time synchronized Hybrid network was simulated using VANET simulators and supports the above requirements. The Black Spot scenario was used for the experiments. The vehicle used in the experiments was equipped with automatic braking control wherein the drivers can override and take manual control anytime. The first case considered for the experiments was when the driver takes manual control. This situation was analyzed using game theory. It was seen that when both the vehicle and pedestrian nodes cooperate, accidents could be completely avoided in Black Spots.

In the second case, the time synchronized hybrid vehicle control system that was developed takes control. The information broadcasted by the pedestrians’ body unit is given as an input to the vehicle control system which constantly checks for the presence of pedestrians in its range. Whenever it senses the presence of humans, it compares its location information and other sensor information to find if the pedestrian is in the bad set i.e. the current position will eventually lead to a crash. In such cases, it sends a control signal to the advanced braking system. This will reduce the chances of crash due to human error caused by his perception-reaction. This was proved mathematically. Some field experiments were also done. The results showed that accidents could be avoided to high speeds of up to 95 km/h using the vehicle control system, which without the system would have led to a fatal accident.

On the whole, the vehicle control system using the Hybrid VANET is a very reliable and efficient solution than any of the existing methods to prevent road accidents.