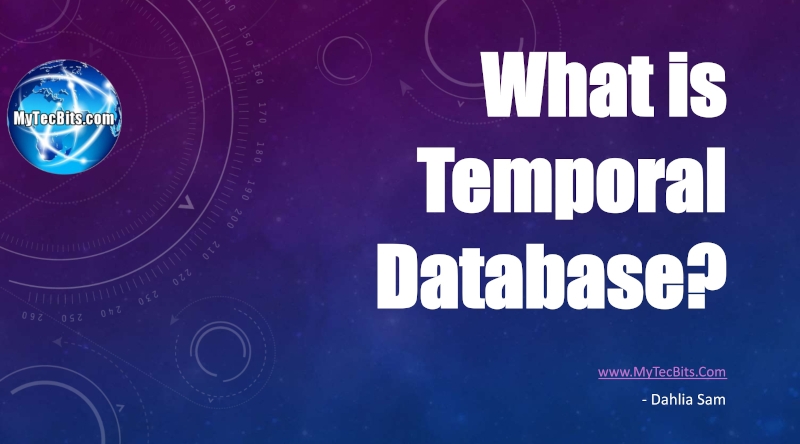 A Temporal Database is a database with built-in support for handling time sensitive data. Usually, databases store information only about current state, and not about past states. For example in a employee database if the address or salary of a particular person changes, the database gets updated, the old value is no longer there. However for many applications, it is important to maintain the past or historical values and the time at which the data was updated. That is, the knowledge of evolution is required. That is where temporal databases are useful. It stores information about the past, present and future. Any data that is time dependent is called the temporal data and these are stored in temporal databases.

There are two different aspects of time in temporal databases.

Temporal Relation is one where each tuple has associated time; either valid time or transaction time or both associated with it.

Now let’s see an example of a person, John:

In a non-temporal database, John’s address is entered as Chennai from 1992. When he registers his new address in 2016, the database gets updated and the address field now shows his Mumbai address. The previous Chennai address details will not be available. So, it will be difficult to find out exactly when he was living in Chennai and when he moved to Mumbai.

The valid time temporal database contents look like this:
Name, City, Valid From, Valid Till

In our example, john was born on 3rd April 1992. Even though his father registered his birth three days later, the valid time entry would be 3rd April of 1992. There are two entries for the valid time. The Valid Start Time and the Valid End Time. So in this case 3rd April 1992 is the valid start time. Since we do not know the valid end time we add it as infinity.

Similarly John changes his address to Mumbai on 10th Jan 2016. However, he has been living in Mumbai from 21st June of the previous year. So his valid time entry would be 21 June 2015.

The table will look something like this with two additional entries:

The database contents look like this:
Name, City, Valid From, Valid Till, Entered, Superseded

First, when John’s father records his birth the valid start time would be 3rd April 1992, his actual birth date. However, the transaction entered time would be 6th April 1992.

The main advantages of this bi-temporal relations is that it provides historical and roll back information. For example, you can get the result for a query on John’s history, like: Where did John live in the year 2001?. The result for this query can be got with the valid time entry. The transaction time entry is important to get the rollback information.

The popular products that use temporal databases include: